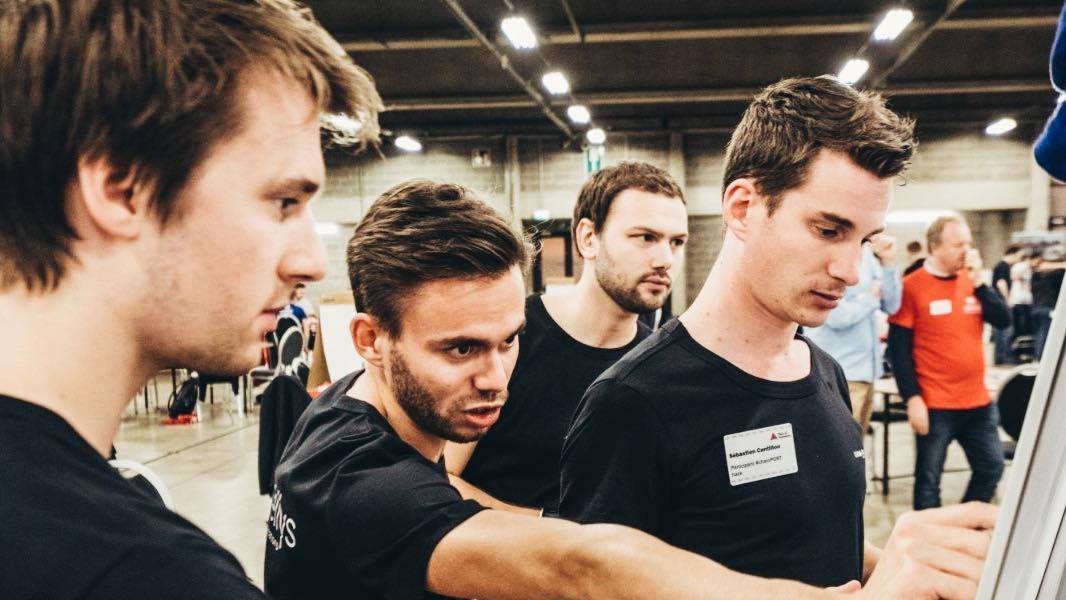 Exellys hacked the Port of Antwerp

Written by Pieter Mijnendonckx on 16 October 2018 for Tech Professionals

As you might have seen on our social media, last week 10 Exellys consultants participated in the very first edition of the ChainPORT Hackathon. Tom Bruyninx, Java API developer at ING and one of the participants, took the time to write down his experiences on LinkedIn. You can find his post right here!

The past weekend chainPORT organised a hackathon in collaboration with the port of Antwerp, Los Angeles and Hamburg. The chainPORT organisation, consisting of 12 ports spread over the world, collaborates to solve complex problems occurring in the ecosystem of a port. During this hackathon the main interest was on the following topics.: ‘Mobility’, ‘Inter Port Communication’, ‘Safety and Security’, ‘Sustainability’, ‘Process and Document Flow’ and ‘Gamification’.

I have been living around Antwerp my whole life. On many occasions the port of Antwerp comes up as a topic. Whether it’s during elections when politicians talk about the added value of having a global port or when you’re stuck in traffic between lorries driving back and forth transporting goods. But apart from the fact that ships arrive in and unload at a quay, I must admit I couldn’t tell you much about the port of Antwerp. Even though it does influence my daily life quite a bit (yes… I do mean the commute).

Thanks to our training programme at Exellys, I, together with 4 other Exellys consultants, got the chance to join the chainPort Hackathon and participate in the Interport challenge. This challenge was about how ports share and communicate data between each other and how they could collaborate better with all parties involved. 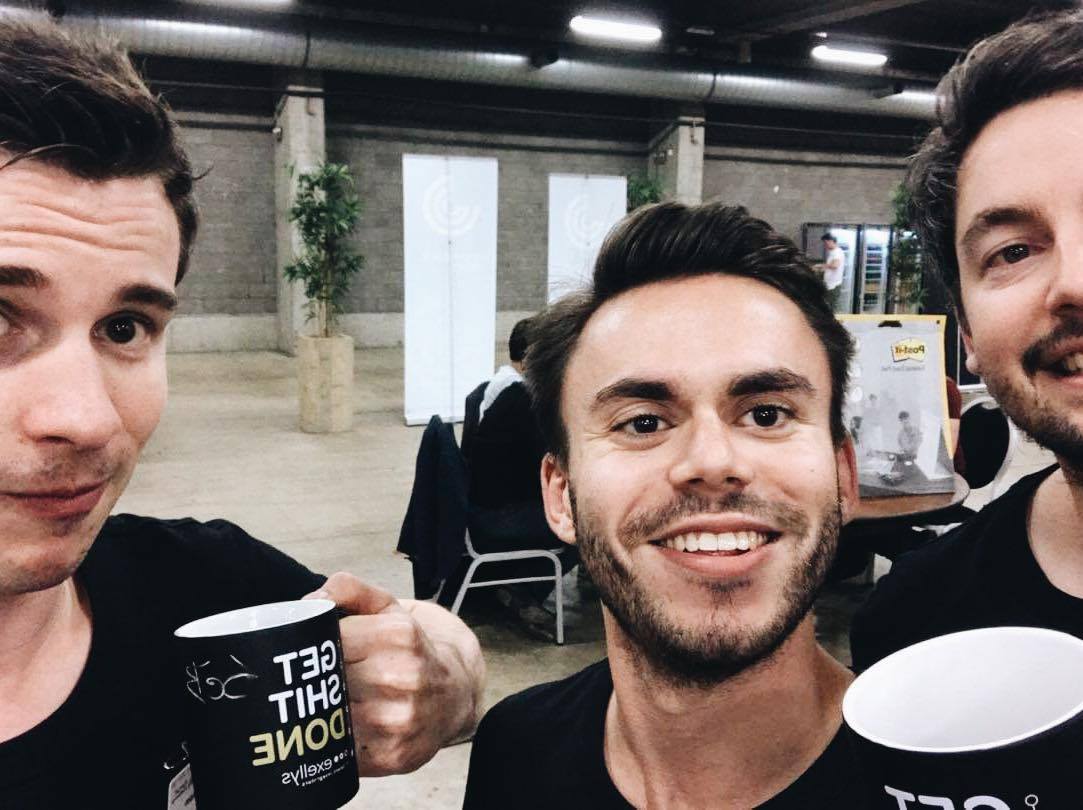 When looking at how carriers, terminals, quay personnel, ships, port authority systems, … communicate we found out that a lot of ‘static’ data (data that does not change often), is communicated in different formats over and over and over again. Ship, certificates and crew data is needed for every entry into a port, however it’s not part of the core and as such it is still a big administrative hassle. There is absolutely no uniformity in how this data needs to be delivered to different ports.

Our solution: ‘A centralized system that provides a uniform data format for crew and ship data’.

As a person you have an ID. We are pitching the same basic concept for everything related to a ship. And as such the data could easily be provided in different flavours to different ports. Maybe not the most creative solution, but it’s definitely a straightforward solution to one of the pains in the port.

We thought about the endless possibilities of such a system. To have one clear communication flow instead of a different flow for every type of data will allow for automation and flexible solutions. It could also be a stepping stone towards an open data platform instead of the current data protectionism of the various carriers. 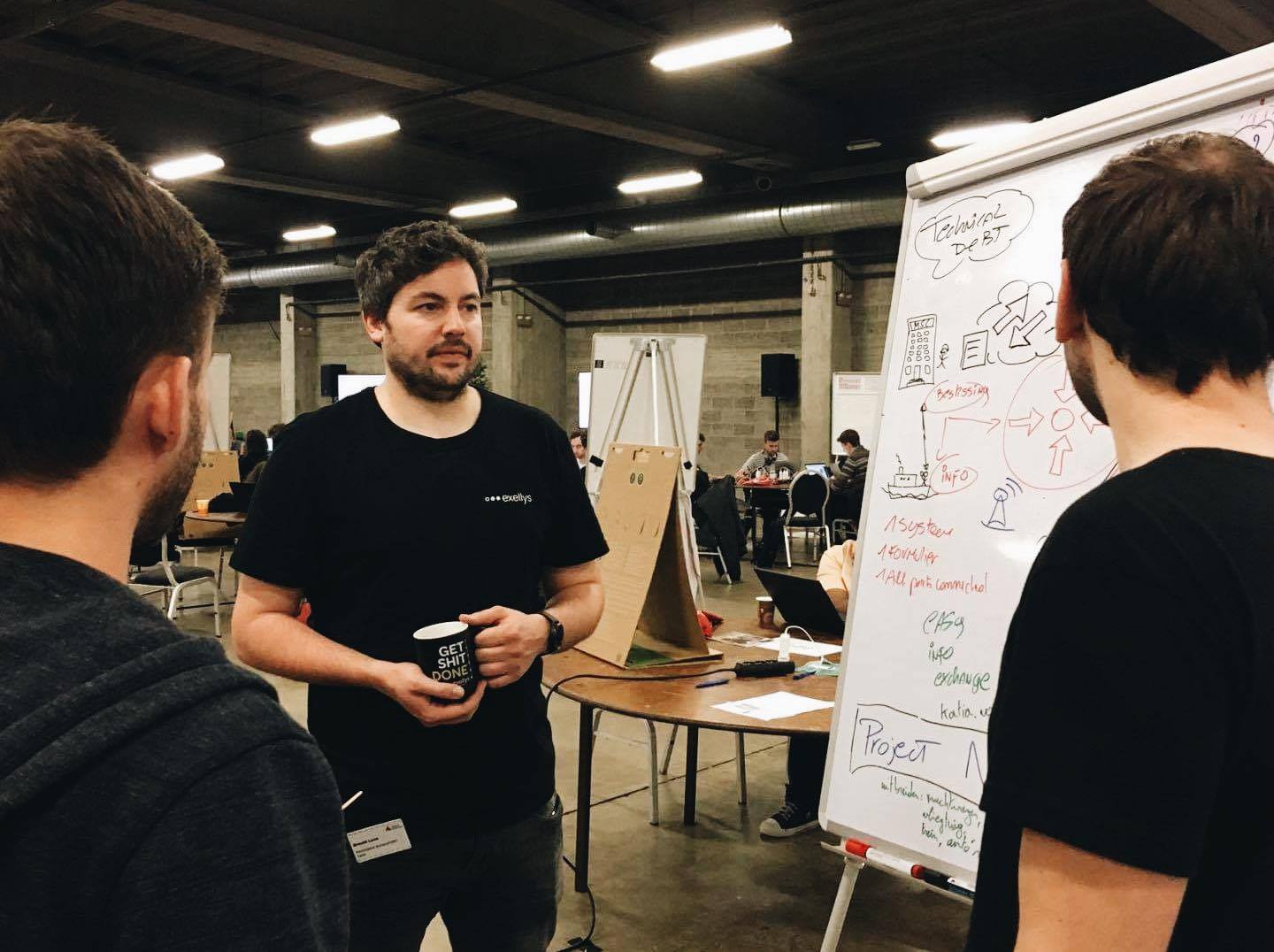 There was stiff competition at the hackathon and as such our pitch did not make it past the pre-selections. However that was definitely not what counted the most.

As IT consultants we stepped out of our comfort zone into a sector we knew nothing about. We focused on brainstorming and creating an idea rather than a very technical solution in 2 days. And most importantly we did so while having fun.

Instead of going straight for the code we went on an adventure and talked to people, we shared pizza with people while chatting about the port and the challenges. To loosen the vibe and let the information sink in we went for rounds of kicker, ping pong or just games of rocket league and mortal combat. (Nothing better to lose steam and button mashing a playstation controller right?)

Participating in these type of events is not only about the challenges. It’s also about having a good time, networking, learning new things, and pushing forward (definitely true at breakfast after a late brainstorming night till 4 am). Obviously we were going for the win, but we did so while also acing the side ping-pong championship.

All in all it was an experience to learn and understand new things I knew nothing about, however with professional companies, proficient in the subject of their challenge, competing on the same level we did, winning was obviously out of the question. 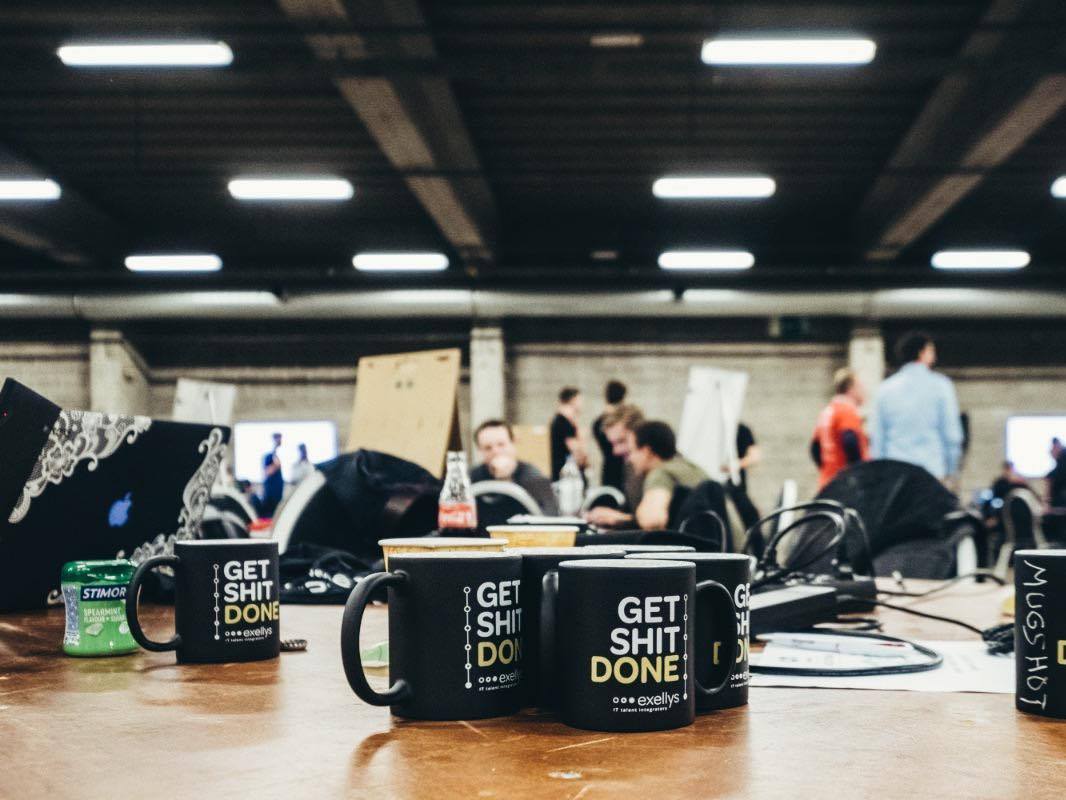 A big thanks to Katia van der Kruisen (MSC Belgium) and Koen De Groof (CVBA Brabo) for having in-depth talks with us during the coaching sessions.

I also want to give some special thanks to our employer Exellys for pushing us in taking on these challenges and providing us the chance to grow in different ways and for delivering awesome support. Also we had, by far, the best marketing attribute present at the event. (The ‘Get Shit Done’ coffee mug is officially a thing now).

Has Tom’s story sparked your interest? Do you put yourself in the hackers and hustlers category? Then you’re probably interested to join an Exellys Hackathon! Free on November 23rd? Keep it that way and keep an eye on our social media (Facebook, Instagram, LinkedIn) because we’ll have more news for you soon!

Pictures by Port of Antwerp